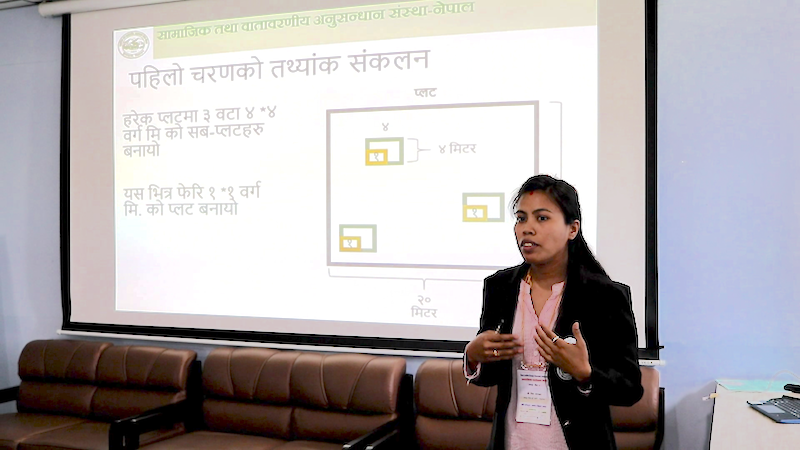 We are proud to announce that Rija Manandhar, our collaborator and friend at ISER-N, has won the Best Oral Presentation Award at the International Mountains in the Changing World (MoChWo) conference for her talk,  “Assessing a low-technology intervention to control Mikania micrantha in the community forests of Chitwan, Nepal” (OR -BIC -2 -443).  Rija’s spoke about results from our Mikania control project, funded by the NSF Coupled Human Natural Systems Program, in the Biological Invasions in a Changing World Symposium at MoChWo.

Congratulations, Rija, for this terrific achievement!

Here is the abstract of her talk:

Assessing a low-technology intervention to control Mikania micrantha in the community forests of
Chitwan, Nepal (OR -BIC -2 -443)

Chitwan National Park’s buffer zone community forests are threatened by some of the world’s worst invasive plant species. These plants alter ecosystems by out-competing native plants and lowering biodiversity. By 2015, two invasive plants, Mikania micrantha and Chromolaena odorata occupied 39% and 52% of CNP buffer zone community forests, respectively. We sought to identify low-cost and low-technology mechanical techniques to combat the spread of invading plants. In 2015, we established a three-year study to evaluate and compare the efficacy of multiple removal methods. We selected control techniques based upon their current use by community forest members (traditional methods) and compared them to a modified approach consisting of uprooting, bagging and burying the invasive plants. We established a combination of four treatments in separate 20X20m2 plots in five selected community forests including 1) Traditional with burning, 2) Modified with burning, 3) Modified without burning, and 4) Traditional without burning. Treatments were conducted three times between January 2016 and September 2017. Ecological measurements were taken six times and included native and invasive herbaceous species cover, stem counts, and tree cover. We found that the presence of Mikania and other invaders was reduced in all treatment types compared to the original baseline measurements in November 2015. However, it was clear that modified treatment techniques in many time periods had significantly less invasive plants when compared to the baseline measurements. This evidence suggests that low-cost and low-technology management approaches can be implemented to successfully mitigate the effects of invasive plants species over time.